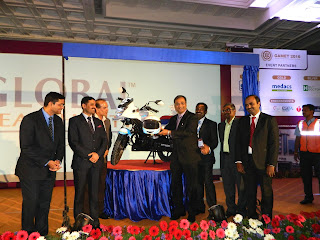 
ET 2016) organized by GHC, where leading Emergency medicine practitioners from across the world were present. It was also an apt moment for the launch as the world would be observing WORLD HEAD INJURY AWARENESS DAY after a couple of days i.e. on 20th March 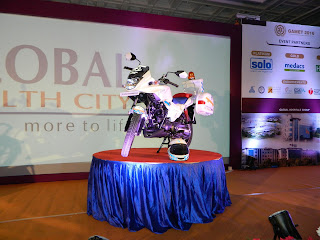 The event begun with a traditional lamp-lighting ritual followed by welcome address by Dr. K. R. Ram Mohan – Head of ER, GHC & the organizing Chairman of GAMET’2016.  Then came the big moment, when the physical manifestation of the LIFECARE RESPONDER service, a beautifully accessorized bike ambulance was unveiled by Col. Hemraj Parmar – Chief Operating Officer, GHC in the presence of elite gathering of ER professionals from many countries, senior officials of GHC and delegates from media. Afterwards the confluence was addressed by Col. Parmar, Dr. K. Sridhar – Director of Neurosciences & Spinal Disorders, GHC and Dr. T. S. Srinath – National President of SEMI, elaborating on safety in everyday life and urging everyone to adopt SAFETY AS A SOCIAL CULTURE. The ceremony ended with a pleasant valedictory address by Dr. Neeraj Mangla – Organizing Secretary of GAMET’2016. Then it was the time for festivities with photo opportunity and a gala dinner. 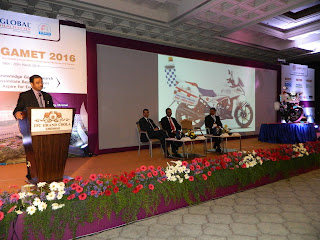 Global Health City initiated the Lifecare Responder service as a strong extension to its existing fleet of regular ambulances. The successful launch of this service by the Karnataka and Tamilnadu governments clearly indicates its worth in saving lives during medical emergencies; especially during rush hours, when a regular emergency evacuation vehicle finds it challenging to wade through the traffic to reach the spot of emergency.

GHC is pleased to bring the novel Lifecare Responder service to it neighbourhood community. The bike-ambulance will be manned by a trained Emergency & Trauma care professional and will be equipped with basic life saving gadgets and medications that are essential to stabilize victims till a regular ambulance arrives. GHC hopes that this noble endeavour is appreciated and accepted by the neighbourhood and foresees to better serve the community during medical emergencies
Posted by Global Hospitals Group at 4:22 AM