In a rare case, dual surgery for spinal tuberculosis (TB) and liver transplant was done at Global Hospitals, Mumbai. First of its kind in the world. 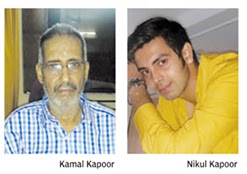 Due to his dual chronic illness and declining health, Kamal Kapoor had lost all hopes for life. Having lost 40 kg in five months and vomiting blood, Mr Kapoor needed an immediate liver transplant, but couldn’t get one as it was detected that he had secondary kidney failure and spinal tuberculosis. He also weighed 130 kg, which made it impossible for him to undergo the procedure.However, city doctors made sure that Mr Kapoor was on his feet against in just a week. In a rare case, dual surgery for spinal tuberculosis (TB) and liver transplant was done within a week even when the path looked bleak for the doctors. Mr Kapoor’s son, Nikul, donated part of his liver to his father. Nikul, who was pursuing first year of his Bachelors in Commerce till earlier this year, decided to give up the course due to his father’s health. He will be resuming studies when the new session starts in 2015.

“While Mr Kapoor was taking treatment for liver failure, he started experiencing pain in his back. On further investigation, compression fracture and disc prolapse of the spine was found,” said Dr Vishal Peshattiwar, spine surgeon from Global Hospital.

He underwent a vertebroplasty surgery for compression fracture, but it did not improve his condition. A subsequent MRI and biopsy revealed the presence of an abscess around the spine, indicating TB. As standard TB medicine may be toxic to the liver, he was prescribed a modified regimen of anti-TB medicine. During this period, Mr Kapoor’s back pain had aggravated and he was bedridden for almost five months.

“However, this was a blessing in disguise for him as he lost 40 kg in this period. Earlier, because of excess weight, he had no choice but to wait for cadaveric liver transplant. But now, he was suitable for a living donor transplant,” said Dr Mohammed Rela, a liver transplant surgeon, from Global Hospital.

Though Mr Kapoor’s condition was serious, the spina; team decided to use an innovative and minimally invasive spine surgical technique.


Source: Asian Age
Posted by Global Hospitals Group at 4:09 AM