In a first-of-its-kind surgery, a 64-years old Bahraini woman with end-stage lung failure receives an implantable artificial lung as a bridge to transplant

Chennai, 25 November: Hopes of a 64-year old woman from Bahrain were kept alive at Global Health City with an implantable artificial lung, for the first time in India such a device had been used as a bridge to lung transplant. By introducing this new technology to India, Global Health City offers a glimmer of hope to thousands of patients with end-stage lung failure. With this innovative technology, the waiting time to receive a donor lung is extended.

Mrs. Fatima Mohammed Ahmed, underwent a lung transplant at Global Health City 3-years ago after her lung condition went bad due to Lymphangioleiomyomatosis (LAM) - a rare lung disease that tends to affect women in their child-bearing age. Post the transplant, she recovered well and returned to routine life within 2-months.

Things had been looking good and under control since then with regular follow-up and appropriate medication support. Unfortunately a year ago, she developed a fungal infection in her lungs, which led to Bronchiolotis Obliterans Syndrome (BOS) - a fibrotic process resulting in progressive narrowing of bronchiolar lumens and airflow obstruction, is a manifestation of chronic allograft rejection.

Having affected by BOS, Mrs. Fatima was prescribed with a series of medication regimes such as Anti BOS drugs, Immuno Suppressive Medications, etc. and the condition of her lung was closely monitored. Almost 10 months after she developed BOS and with medical management, her lung did not show any sign of improvement.

Dr. Vijil Rahulan – Senior Consultant Pulmonologist said, “Adding to her worries, her lung further deteriorated. She was in ventilator support and was not an eligible candidate for immediate lung transplant. Hence, we decided to postpone the surgery so that sufficient time is given for her to be ready to receive donor organ. Usually, people with end-stage lung failure are supported with a heart-lung bypass machine known as Extracorporeal Membrane Oxygenation (ECMO) that uses a pump and oxygenator to deliver oxygen to the vital organs. While ECMO can be successful for this purpose, it is a temporary solution. Extended use can pose serious health risks, including permanent organ damage and frequent bleeding; moreover it needs a continuous monitoring in ICU.”

“In the case of Mrs. Fatima, we had to offer the best possible support that buys her time to revive her condition and to wait for donor lung to become available. Considering the situation, our expert team decided to use Novalung, an Implantable Artificial Lung device. It is a pumpless device that needs minimal monitoring in the ICU and patient can be ambulated easily with the device in place which is not possible with ECMO”, pointed out by Dr. Rahul Chandola – Senior Consultant Heart & Lung Transplant Surgeon.

Commenting on the occasion, Dr. Govini Balasubramani – Senior Consultant Heart & Lung Transplant Surgeon said, “In India alone, about 1 lakh people were diagnosed with chronic end-stage lung diseases every year. Most of them succumb to death within 3 to 5 years even with appropriate medical management. Most importantly, 5 – 10% of them require immediate transplant in order to survive. Unfortunately, only about 17 such lung transplant surgeries were reported in India till date. The huge gap is primarily due to the non-availability of matching organ at the right time and a very minimal number of centres performing such a high end procedure. Novalung, as a bridge to transplant, supports the patient’s survival by extending the waiting-period to receive a donor organ up to 6 months.”

“I am very much thankful to the doctors at Global Health City for offering me another chance to live my life and to spend time with my family. When I came here with a failed lung condition, I and my family had a very little hope. Now with the artificial lung device implant, I am waiting to receive a donor lung and I am confident of starting a fresh lease of life again shortly”, said by Mrs. Fatima.
Highlighting the uniqueness of the procedure, Dr. Ashok Vardhan – Group COO of Global Hospitals added “Over the years, Global Health City has become a synonym to the most preferred organ transplant centre and is one of the largest multi-organ transplant centres in India. Adding to many first-of-its-kind transplant surgeries, today with India’s First Artificial Lung Device implant Global Health City has once again demonstrated its constant endeavor to offer the best possible treatment to patients by combining contemporary technology and processes.”

Novalung – An Implantable Artificial Lung Device
It is a breathing support system which is designed to support the exchange of gas in the lungs of the patient. The system removes carbon dioxide from incoming blood and Infuses oxygen into the blood thereby increasing oxygen levels. Clinical application of this device is indicated in the situations where strict application of lung-protective is performed and where there is insufficient exchange of gas, in particular insufficient removal of carbon dioxide. 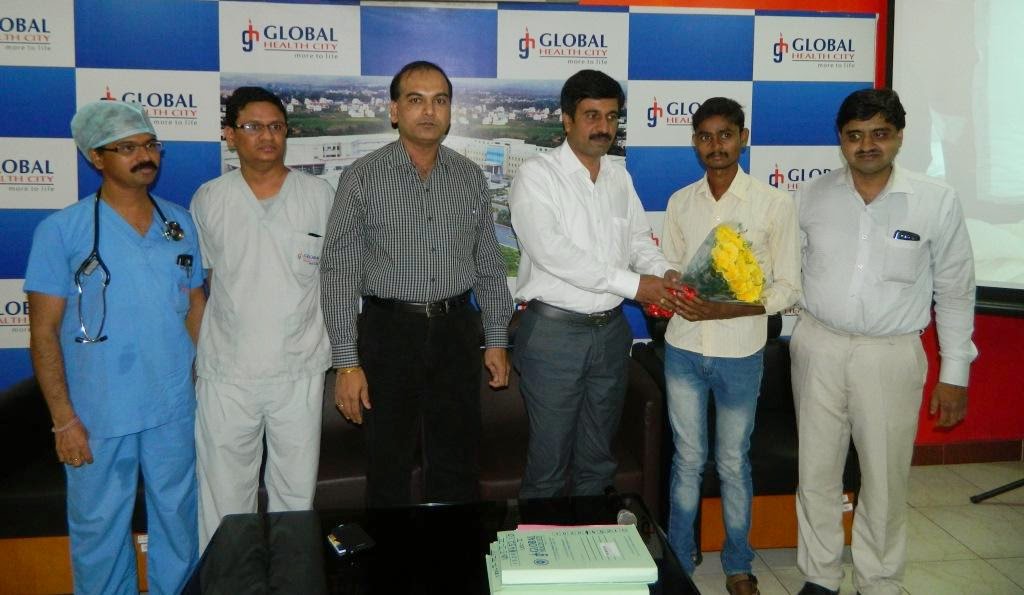 Chennai, 19th November 2014:  Ganesan a 23 year’s old generally fit contract labourer, native of Salem met with an accident at a construction site and became unconscious. After first aid and due care, he was presented with critical heart injury. Investigations revealed an acute heart rupture and Temponade (compression of heart due to blood in the pericardial sac). Patient required an emergency open heart surgery to solve the acute rupture.

Open Heart Surgery: The Patient underwent an emergency surgery on 5th Nov. During the surgery around 2 litres of blood accumulated on the pericardial cavity was identified and his heart function was compromised due to severe cardiac Tamponade (compression of heart due to blood in the pericardial sac). As soon as surgeons opened the pericardium they sucked the blood with special blood recycle machine (Cell saver) and transfused the same to the patient again. After relieving the cardiac rupture measuring 3 cm at the left atrial and left pulmonary vein junction was repaired, and the patient survived the injury.

Speaking on the occasion Dr. Govini Balasubramani, Consultant – Cardio Thoracic surgeon, said “It is a difficult task to save a patient with acute cardiac rupture due to Chest wall Injury. Distension (swelling) of the neck vein, CT scan Chest and echocardiograms suggested cardiac tamponade (compression of heart due to blood in the pericardial sac), due to cardiac rupture. In patients surviving the initial insult, the overall mortality rate is 60%-90%. He was presented with a hypotension (low blood pressure), distension of neck veins, intact pericardium and cardiac tamponade. The diagnosis confirmed with emergent CT chest and echocardiography prior to operative intervention. Repair performed by median sternotomy (a kind of surgical procedure) and the potential necessity for cardiopulmonary bypass. We conclude rapid prehospital transportation, a high index of suspicion, and prompt surgical intervention contribute to survival in these patients. On this occasion I would like to thank my team of doctors, nurses and perfusionist and administrators who had helped in saving the patient’s life.”
Posted by Global Hospitals Group at 11:25 PM 1 comment: