Facts about Osteoporosis: Things You Should Know

Recently one of my relatives, a lady in her sixties fell down at home and started complaining of back pain- mostly while changing positions (like getting up from bed or chair, turning in bed etc). She was being treated for the usual back pain by many of her doctors with painkiller medicines without any progress, until an MRI revealed that she had fractured a bone in her spine. This is the usual story of many women after their menopause. This is the story of OSTEOPOROSIS.

Bone strength accumulation in human beings is a time bound process. Upto the age of 30 you have the potential to gather as much bone mass as possible. This is called Peak Bone Mass. After that we start losing bone gradually year by year and it becomes more pronounced in the twilight years of our lives. This happens equally in males and females upto 45 years. In ladies, as menopause sets in, this loss of bone mass is even more pronounced which sets the stage for OSTEOPOROSIS.  Men too can suffer from Osteoporosis but generally after the age of 70.

Osteoporosis affects the spine and the hips most commonly. Bone density test followed by a few blood tests is one of the ways to assess your risk of developing Osteoporosis.

Osteoporosis could be kept at bay by accumulating and improving your bone balance (like bank balance). It can happen if you start early in life. This happens by activities, importantly sports, which stress or impact the bones (skipping, basketball, gymnastics, dancing, jogging etc). Encouraging any outdoor sport has beneficial effect on the body.

For rest, all is still not lost. In women as in men any weight training exercises do positively impact the muscles and bones. The training has to be supervised to avoid injury. We do encourage some weight training in women with osteoporosis too, apart from medicines. Calcium & vitamin supplements are not the treatment for osteoporosis.

Dr Uday Pawar is a Spine Surgeon, attached to Global Hospitals, Mumbai. He has close to 10 years of Spine related consulting and surgical expertise.

He is also interested in the use of technology to help patients and doctors alike. Educating patients and helping them imbibe informed decision making process is what he likes. He also writes spine related blogs to help spine patients.

He is a marathon runner and a trekker.
Posted by Global Hospitals Group at 6:01 AM No comments: 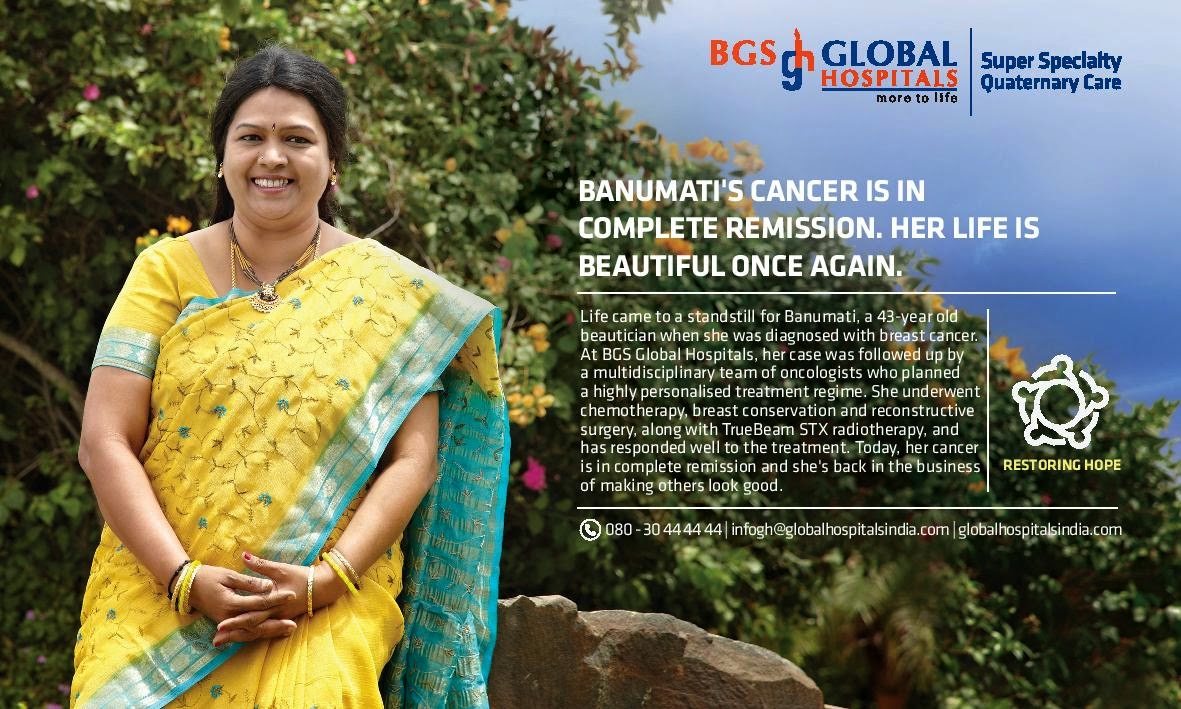 At BGS Global Hospitals Ms. Banumati’s cancer is in complete Remission. Her life is beautiful once again
October 4th, 2014: Bhanumati, a 43 year old lady from Bangalore came to our hospital with history of lump in her right breast since 3 months. She was told about us by one of her friends whose relative was treated by us.

PET-CT (whole body scan) showed there was no spread of the disease anywhere else in the body.

The size of her lump was very big. She was given an option of Organ preservation that means instead of mastectomy, she could undergo Neoadjuvant chemotherapy wherein Chemotherapy is given before the surgery. By doing so, we downsize or shrink the tumour. The patient who otherwise would have to undergo complete removal of the breast has now become eligible for Breast conservation surgery.

Bhanumathi underwent 6 cycles of chemotherapy first. The tumour reduced to 2 x3 cms in size.
She then underwent Breast conservation surgery with a Lattisimus dorsi flap cover to give a very good cosmetic outcome. Subsequently, she was given TrueBeam STx radiation therapy.
PET-CT after 6 months showed that Bhanumathi is in complete remission. Her disease has not only been cleared but her feminity also has been retained.

Banumathi, Breast cancer survivor, said, “Life came to a standstill, when I came to know I was diagnosed with breast cancer. But I didn’t lose hope and had the support of my family. My oncologists, explained the treatment course in detail, which helped me understand the illness and gave the courage to fight the cancer. Post treatment, I’m back to normal life and my life is beautiful once again. I thank the oncologists, at BGS Global Hospitals, for giving me a new lease of life. I would encourage all cancer patients by telling them not to give up hope as cancer today is a manageable disease.”
Posted by Global Hospitals Group at 11:32 PM No comments:

Every patient with cancer wants to hear the word CURE, from their doctor. But will an Oncologist (cancer doctors) ever use this word CURE?

A normal cell has a cell cycle. It is born, it grows in size, it matures, it performs its functions, it reproduces and then it perishes. When a normal cell changes, it starts growing and reproducing abnormally and uncontrollably and when it no longer dies it is called as a cancer cell.
Even when treatment for cancer is given successfully, since the tendency of the cancer cell is to grow and reproduce one can never be sure if all the cancer cells have been destroyed by the treatment.
So what is the difference between cancer cure and cancer remission? Doctors almost never use the term cure; rather, they usually talk about remission.
Remission is a term that doctors often use to refer to a condition when there is absence or no evidence of the disease. It implies that there is a potential chance for recurrence (relapse). In cancer when the term remission is used it means that there is no trace of the disease at that point of time. Or the disease may be so small that it cannot be detected by physical examination or by any scan.
Cure is a term not normally used when speaking of cancer, because of our inability to very accurately predict if cancer will come back or not in any given individual.
Remission can be of two types.
Complete remission- means that after the treatment there are no symptoms and signs in a patient to indicate the presence of cancer. However, even when a person is in remission, there may be microscopic collections of cancer cells that cannot be identified by current investigations. This means that even if a person is in remission, in the future, can have a recurrence or relapse of their cancer.
Partial remission- means that a major percentage of the signs and symptoms of cancer disappear, but some of them may still remain.
Complete remission would therefore be better than partial remission because with partial remission the chances of recurrence are higher.
Doctors will sometimes refer to 5-year cure rate or a 10- or more year cure rate. What is really meant by this is a 5- or more year remission rate. The longer the remission time lasts, the greater the possibility that the cancer actually has been cured. However there are cases of cancer recurrence many, many years after remission begins.
So in Breast cancer, we say when the disease is in stage 1 there is a 95 percent 5-year cure/remission rate. It means that after five years, 95 percent of people with that cancer will still be in remission (meaning that one has an extremely high likelihood of not having a recurrence for at least five years). As the longevity increases, doctors can now often give remission rates for 10, or even 20 years. In many ways, the approach to most cancer treatment is to make it a chronic disease that lasts for many years.
In cancer, can we really talk about cure?
No. We can only talk about remission. But the remission may be so long or the chances of relapse of the disease could be so low that one could consider cancer to be completely cured.
All the research that is happening in the field of Oncology is with an aim of prolonging the remission rate.
With the present, advanced modalities of cancer treatment the chances of long remission rate is very high and surely there is a HOPE for all the cancer patients