One Heart Surgery - Saves the lives of two
IN A FIRST OF ITS KIND HYBRID ASD DEVICE IMPLANT IN INDIA , DOCTORS AT GLOBAL HEALTH CITY PERFORMED AN ECHO GUIDED KEY HOLE CARDIAC SURGERY ON A 31 YEAR PREGNANT LADY FROM IRAQ 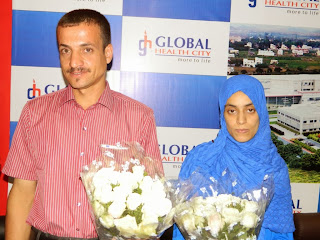 The doctors in Iraq advised Surgical ASD closure, with the risk of loosing the child and with the risk of excessive bleeding in mother during the surgery. Mr. Arkan Kutaif Owain Zaibil decided to shift his wife for further treatment to Global Health City. Dr.R Ravi Kumar and Dr. Nandkishore Kapadia first reviewed the patient and ruled out the option of an open heart surgery due to high risk of abortion and threat to the life of the unborn child. The doctors also ruled out Cath lab device closure of ASD to be risky since it can induce anomalies in the unborn child due to radiation exposure.

"This is a very rare complex clinical situation which occurs in 0.1% across the world. Whenever such situation exists, the first objective is to save both mother and then the child, since mother's life is at highest risk. Innovative medical therapies like hybrid procedures for deploying DEVICES to close Holes on Heart are a boon to treat heart diseases in pregnancy.” said Dr. R. Ravi Kumar Senior Consultant - Interventional Cardiology, Global Health City.

The doctors at Global Health City after due consideration decided to close the ASD via a Small(2 inch) incision to right chest (4th ICS) and deployment of a 28 mm ASD Device – which is a Double disc mesh made of NITINOL . During the surgery, the Double disc was “Pulled “inside a 4.5 mm diameter Sheath and the Sheath used to move across the ASD through a Small Pin sized cosmetic incision made in the Right Upper side of the Heart (Right Atrium). Bleeding was controlled using a Purse string. The passage of the Sheath and Device was monitored using a NOVEL ECHO probe attached to patient’s chest during surgery.
Speaking alongside the patient Dr. Nandkishore Kapadia, Senior Consultant – CTVS, Global Health City said “This procedure will be etched in our memories, for when anesthesia was reversed on the operation theatre itself, her motherly instincts came to the fore when she asked if everything was ok and whether her baby was fine. This gave us goose bumps and a gratification as life savers which no award or reward could match. She was stable in ICU and the recovery was uneventful. Ms. Intisar Kareem Naser is back to normal life and is back on her feet on the third day. “

Emoting his feelings, Mr. Arkan Kutaif Owain Zaibil husband of Ms. Intisar Kareem Naser said “In the name of the almighty, I would like to thank the medical team at Global Health City for adding ‘more to life’ and saving my wife and our child. I pray to almighty to bestow strength and his choicest blessings to all the doctors to save lives through such path breaking surgeries every day.” He broke into tears saying “God is Great”.
Posted by Global Hospitals Group at 2:58 AM