In the fast-growing consumer society today, things are getting easier for even school kids to obtain. A fast-food store like McDonald’s is right next to schools advertising a “Happy Meal.” Soda vending machines are available in schools. Fast foods and sodas is neither restricted nor banned products and increasing number of parents buy these foods to appease their children and save time without imagining the harmful effects of these foods. The result is that 30.5 percent of adults are considered obese and obesity is killing more people than smoking. These shocking statements are not imaginary but these are facts of the world, in which we live.
The Obesity has reached epidemic proportions globally, with more than 1 billion adults overweight - at least 300 million of them clinically obese - and is a major contributor to the global burden of chronic disease and disability. Often coexisting in developing countries with under-nutrition, obesity is a complex condition, with serious social and psychological dimensions, affecting virtually all ages and socioeconomic groups.
Obesity has become an epidemic across the world and if steps are not taken immediately – both at individual levels as well as at national levels – obesity can become a calamity.
HOW DOES OBESITY SET IN
To understand obesity, it is essential to understand how it all beings. It begins with the wrong TAP – Type of food, Amount of food & Pattern of food consumed. The result is that the amount of calories consumed is not expended. An average adult requires about 2000 calories per day, approximately. If the amount of intake exceeds 2,000 calories for a long time without exercise and proper workouts, the person tends to become obese. In most cases, people do not realize they are obese. They just tend to think they have put on extra weight. People do not need to go to a doctor to find if they are obese, they just have to follow a simple calculation to detect obesity:

BMI = Weight (kg) / Height x Height (m2)
Normal = BMI < 23
Over weight = BMI 23 – 25
Obese= BMI > 25
Calculate your BMI on a regular basis to check if you are getting obese. Also, keep a note of your calorie intake. So, next time you pick up a pack of chips or aerated drink or chocolate, glance through the nutritional facts and calories!
TREATMENT 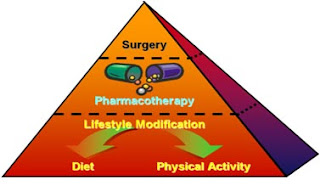 OBESITY TREATMENT PYRAMID
Obesity is an irreversible disease. Proper diet and physical activities are any day preferred to any other forms of treatment. Medicines are of limited value in the treatment of Obesity. Only, Morbid Obesity (BMI > 40) usually requires surgery as other forms of weight management fail to provide satisfactory and sustained weight loss. Morbid obesity affects the normal mechanical, metabolic, and physiological bodily function. These "co-morbidities" affect nearly every organ in the body in some way, and produce serious secondary illnesses, which may also be life threatening. The cumulative effect of these co-morbidities can interfere with a normal and productive life and can seriously shorten life, as well. For morbid obesity, as mentioned above, there is remedy – Bariatric Surgery.


Bariatric surgery, or weight loss surgery, is a type of procedure performed on people who are morbidly obese so that they can lose weight. The surgical procedure is of three types:

·         Reducing the size of the stomach that stores ingested food with an implanted device (gastric banding) or
·         Removing of a portion of the stomach (sleeve gastrectomy)
·         Re-routing the small intestines to a small stomach pouch (gastric bypass surgery)
OBESITY IN INDIA
Obesity has reached epidemic proportions even in India in the 21st century, with morbid obesity affecting 5% of the country's population. India is following a trend of other developing countries that are steadily becoming more obese. Processed food has become much more accessible following India's continued integration in global food markets. Indians are genetically susceptible to weight accumulation especially around the waist. A shocking study presents the following ratings of obese Indians:
India being the DIABETES CAPITAL with about 50 million estimated diabetics, obesity only worsens the situation, as it is a major contributor to diabetes.
In such a situation, where can you seek help for this epidemic? Some say the government should take charge of the situation like in the cases of seatbelt and smoking laws. Others say that it is the responsibility of the private sector. Actually, it has to be a joint effort. The government should have some control over what people are consuming and should regulate fast food. Fast food joints and soda makers should be more socially conscious than just a moneymaking body. People should also be more aware, keep control of their diet, and get proper exercise.
Freedom is a birth right….so is health! Why not claim it! 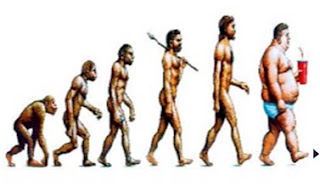 Posted by Global Hospitals Group at 12:06 AM